You can’t count on the USPTO to proofread your patent applications, especially for common mistakes like missing antecedent basis. For example, this 2006 study found that in a sample of 1600 patents issued by the USPTO:

For those practicing in field, the reasons for these patent quality issues are quite clear.  Examiners in the USPTO spend most of their allotted time searching for prior art, not proofreading your applications. In addition, the quality of the examination varies greatly between individual examiners. Therefore, it is your responsibility to ensure that each patent application is thoroughly proofread before it is filed. If you file an application that is riddled with errors, you may eventually get a patent from the USPTO, but that patent will have little value because it would be hard to enforce.

This is a pretty funny typo that wasn’t caught by the USPTO.  Would you ever want to enforce claim 19 against the competitor? Probably not, if you had a choice. While this is clearly a typo of the term “the means” and would likely be construed by the court as such, it’s hard to imagine the jury reading this claim without snickering. And if the patent owner doesn’t take care to proofread its patents for obvious mistakes, then the patent can’t be worth that much, right? 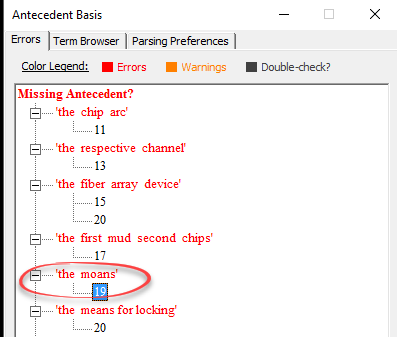 Notably, other claims also have missing antecedent basis issues.  For example, claim 17 says “the first mud second chips,” while it clearly should’ve said “first and second chips.” Other claims, such claims 15 and 20 also might have issues because they recite “fiber array devices”, while their parent claims recite “fiber arrays”.  These mistakes are all fairly difficult to spot with a naked eye, but using a proofreading software tool like ClaimMaster makes it much easier.

If you’d like to try out ClaimMaster on your patent documents, download the free 30-day trial from here.